Bipolar disorder, also known as manic depression, is a chronically recurring condition involving moods that swing between the highs of mania and the lows of depression. Depression is by far the most pervasive feature of the illness. The manic phase usually involves a mix of irritability, anger, and depression, with or without euphoria. When euphoria is present, it may manifest as unusual energy and overconfidence, playing out in bouts of overspending or promiscuity, among other behaviors.

The disorder most often starts in young adulthood, but can also occur in children and adolescents. Misdiagnosis is common; the condition is often confused with attention-deficit/hyperactivity disorder, schizophrenia, or borderline personality disorder. Biological factors probably create vulnerability to the disorder within certain individuals, and experiences such as sleep deprivation can kick off manic episodes.

There are two primary types of bipolar disorder: Bipolar I and Bipolar II. A major depressive episode may or may not accompany bipolar I, but does accompany bipolar II. People with bipolar I have had at least one manic episode, which may be very severe and require hospital care. People with bipolar II normally have a major depressive episode that lasts at least two weeks along with hypomania, a mania that is mild to moderate and does not normally require hospital care.

Bipolar disorder is a mental illness that, if left untreated, can cause the patient to lose jobs, family, and self. Many times the individual does not realize there is anything wrong. They believe everyone is sometimes happy and sometimes sad. This is true, but in a bipolar person, the moods are extreme, and the pendulum can swing back and forth for no apparent reason. Their response to any situation can be inappropriate and extreme. 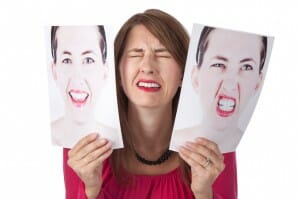 Suicide is a problem for many bipolar patients when they come down from a “happy” high into the pits of depression and hopelessness. Another problem is that they tend to be non-compliant with their medications. Though Bipolar disorder is usually a life-long illness, patients frequently stop taking their medications when they “feel better”.

The highs and lows of Bipolar disorder may last for hours, days, or months. It is sometimes confused with schizophrenia, making it more difficult to diagnose.

Symptoms of a Manic Phase

Symptoms of a Depressive Phase

The most dangerous time for a suicide attempt is when the patient is on their way into or out of a depressive episode. When the patient is in the despair of total depression, she/he is too tired to plan or even contemplate the energy it would require to carry out the deed. When the patient is at the pinnacle of the happy “high”, they feel that everything is right with the world. It’s that in-between time that they are most prone to planning and implementing suicide.

This fact makes it very hard for the patient’s family and friends to realize the danger. Just when they think the patient is better is usually when disaster strikes.

Scientists are not certain what caused this disorder. The prevalent belief is that a combination of factors is responsible. It does seem to have some genetic basis, as it can be linked through family members at a higher rate than the general population.

Patients go through psychotherapy and take medications that stabilize moods. Most of the medications are also anticonvulsants. The other drug used with a good success rate is Lithium. Patients must take these medications as prescribed, even when they are feeling fine to keep their mood stable and stop the extreme behaviors.

With proper medications and psychotherapies, those with Bipolar disorder can live a normal, healthy life.

Posted by Donna Wong - Hypnotherapist and dream therapist at 10:18 PM