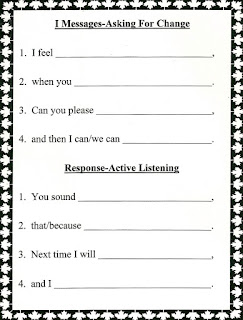 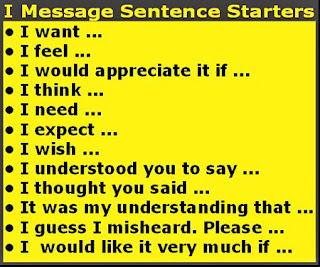 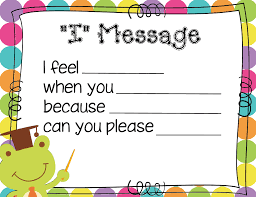 How to get your message across respectfully

We have all done it. Lost our cool in the heat of the moment and said something that we later regretted. The tool to overcome this is I-messages. It gets the message across about how you feel and what behaviour made you feel that way. All this without sounding like you are blaming them. I-messages are a simple way to communicate in any situation. But do not confuse simple with easy. It takes skill and practice.
New! The brief guide to I-messages post is now available.

I-messages provide feedback safely, as they avoid putdowns, judgement or assigning blame. There are three types of information when providing effective feedback to someone about their behaviour. These are:
A description of the behaviour is necessary to inform the person what the problem is. This should always be included in the message otherwise they will not know what behaviour to change. Including either of the other two types (how it makes you feel and what the effect is) will normally be sufficient to communicate the problem effectively.
An I-message states the behaviour and describes the speaker’s feelings (numbers 1 and 2 above). The speaker owns their feelings without coming across as judging the person. It promotes a willingness to exchange information, find a solution and to seek a constructive change in the situation. Rarely does this make matters worse.
I-messages are delivered by saying: ‘I feel … (name the feeling) when … (describe the behaviour)’. For example, you might say, ‘I feel angry when I am expecting a ride home and am forgotten.’
Some other examples of I-messages are:
Download this information about I-messages. (This document is released under a creative commons licence. See document for details.)
New! The brief guide to I-messages post is now available.

What is an I message?

I-messages are used to give feedback to others while avoiding putdowns, judgement or assigning blame. I-messages:

How to use I messages?

To using an I-messages the speaker starts with describes their feelings and then the behaviour that creates those feelings. ‘I feel … (name the feeling) when … (describe the behaviour)’. Some other examples of I-messages are:

Why use I messages?

What are You messages?

With you-messages, the speaker uses you or you’re even if used together with ‘I feel … when …'.

Why avoid using You messages?

The speaker using a You-message:

In You-messages, the message contains either you or you’re in it. For example, ‘You make me so angry because you forgot to give me a ride home.’ Using You-messages blames the person for the situation and judges them. It can also hold others responsible for the feelings of the speaker as well as include putdowns. It causes feelings in the receiver that can make them defensive or start making excuses. All of this can make the situation worse.
The examples of the I-messages above have been turned into You-message to show this:
Back to the top

An effective I-message does not contain a ‘you’ reference in it. It is common for those new to I-messages to use the form, I feel …(feeling) when you … (behaviour) such as ‘I feel upset when you ignore me.’ It could be classed as both an I-message and a You-message. However, the ‘you’ in the statement still blames the other person, making them less likely to cooperate. Therefore, the I feel … when you … message needs to be treated as a You-message and avoided. Everything said before the ‘you’ is generally ignored by the person receiving the message.
As soon as they hear the ‘you’, most people immediately concentrate on the personal attack that follows. It is similar to using ‘but’ in an argument. This is generally interpreted to mean that you may now disregard everything I have said prior to the ‘but’. For example, ‘I agree with you, but …’ is normally followed by listing all the reasons why you do not agree with them.
Always avoid using the ‘you’ word when giving constructive feedback as it will be heard as a personal attack. Instead replace it with a generic term, like ‘people’, ‘someone’ or ‘anybody’. By using a generic term with an I-message, others are more likely to listen to your entire message and willingly change their behaviour.
You will normally feel the same no matter who is using that specific behaviour. So you do not have to single them out. When you don’t accuse directly, it enables them to save face and their reaction to you is more open-minded and receptive. It provides an opportunity to start a conversation and work towards a solution.
It is worth noting that I-messages can be used negatively in order to try and manipulate someone. For example, ‘I feel worthless when we are not together’, or ‘I feel angry when people go off and talk to somebody else without me.’ This use is calculated to manipulate the other person into behaving in the manner the user wants. Like any tool it can be used for good and bad.
Download the PDF version about I-messages. (This document is released under a creative commons licence. See document for details.)
Back to the top

ALTERNATIVE WAYS OF DELIVERING AN I-MESSAGE

The simplified version, I feel … when … is the best starting point when teaching or learning to use I-messages. It is less complex and gets the most important information out first - the behaviour and the feeling about the behaviour.
A danger in using a template such as this is that it can become predictable or sound false and manufactured. This comes down to what the actual content is and how the message is delivered. To offset this there are a number of additional options.
Below are 20 additional variations to consider. They use the three types of information feelings, behaviour and effect in various combinations.
The basic I-message includes the feeling and the behaviour.
I feel… (feeling) when… (behaviour)

Possible other words to replace feel are: get and become

Or you can reverse the order:
When… (behaviour) I feel… (feeling)

Possible other words to replace when are: because, as, whenever, after, and due to.

I need… (behaviour) because… (effect)

I expect… (behaviour) because… (effect)

It was my understanding that… (behaviour) because… (effect)

The complex feeling, behaviour and effect messages
I would… (feeling) it if … (behaviour) because…(effect)

(behaviour and effect)… and then I feel … (feeling)

The final option is to use a feeling and effect message.
Just be aware that, when using this type of message, the actual behaviour that is causing the problem is not included in the message. Only its effect is, so you might need a follow-up message to outline the behaviour to change.
I feel… (feeling) because… (effect)

Possible other words to replace because are: as and due to

Posted by Donna Wong - Hypnotherapist and dream therapist at 6:52 PM

Email ThisBlogThis!Share to TwitterShare to FacebookShare to Pinterest
Labels: I message