A Taxi driver's Story
Despite that you have everything, you still feel sad if you have no love from your family.

This story shows why Family Love is soo crucial for happiness
http://www.donnadreamhypnosis.com/…/a-taxi-drivers-story.ht…
这正《讓愛在家庭流動》工作坊的理念之一 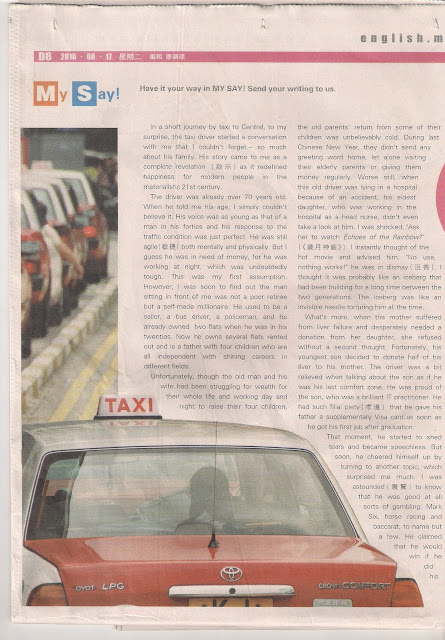 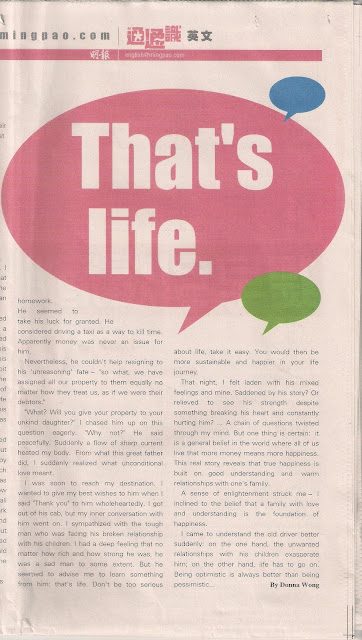 
In a short journey by taxi to Central, to my surprise, the taxi driver started a conversation with me that I can’t forget – so much about his family. His story came to me as a complete revelation as it redefined happiness for modern people in the materialistic 21 century.


The driver is already over 70 years old. When he told me his age, I simply couldn’t believe it. His voice was as young as that of a man in his 40s and his response to the traffic conditions was just perfect. He is still agile both mentally and physically. But I guess he was in need of money for he was working at night, which was undoubtedly tough. However, I was soon to find out that the old man in front of me was not a poor retiree but a self-made millionaire. He used to be a sailor, a bus driver, a policeman and he already owned two flats in his twenties; now he is the owner of several flats rented out and a father with four children who are all independent with shining careers in different fields.


Unfortunately, with whole-life struggling for wealth, working day and night to raise the four children, the old parents’ return from some of their children was unbelievably cold. During this Chinese New Year, they didn’t send any greeting words home, let alone visit the two elderly parents or give them money regularly. Worse still, when this old driver was lying in a hospital due to an accident, his eldest daughter, who was working in the same hospital as a head nurse, didn’t take a look at him. I was shocked. “Ask her to watch Echoes of the Rainbow?” I instantly thought of the hot movie and advised him. “No use, nothing works!” he was in dismay. I thought it was probably like an iceberg for a long time between the two generations. The iceberg has been like invisible needles torturing him all the time.


What’s more, when the mother was suffering liver failure and desperately needing a donation from her daughter, she refused without a second thought. Fortunately his youngest son immediately came to the rescue by donating half of his liver to Mother. The driver was a bit relieved when talking about this son as if he was his last comfort zone. He was proud to tell me that the youngest was also a brilliant IT man. He was so filial a son that he had given the old father a supplementary Visa card as soon as he got a job after graduation.


At this moment, he was tearing up, speechless. But soon, he cheered himself up by turning to another topic, which surprised me as much. I was astounded to know that he was good at gambling! No matter which type it was, Mark Six, Horse racing or the casino, he claimed he would win money if he did his homework. He seemed to take his luck for granted. He considered driving a taxi as kind of killing time. Seemingly money was never an issue for him.


Nevertheless, he couldn’t help resigning to his ‘unreasoning’ fate – “so what, we have assigned all of our property to them equally no matter how they treat me and Mother. It’s as if we own them.”


“What? Will you give your property to your unkind daughter?” I chased him up on this question eagerly. “Why not”? He said peacefully. Suddenly a flow of 'electric current' heated my body. From this great father, I suddenly realized what unconditional love meant.


I was soon to arrive. I wanted to give my best wishes to him when I said “Thank you” to him wholeheartedly. I got out of the car, but my inner conversation with him was still going on. I was in empathy with the tough man in facing the broken relationship with his children. I had a deep feeling that no matter how rich in wealth and strong in character, he was a sad man to some extent. But he seemed to advise me to learn something from him: That’s life - don’t be too serious about it, take it easy. Then you will be more sustainable and happier in your life journey.


That night, I felt laden with his mixed feelings and mine – Saddened by his story? Or relieved to see his strength despite something breaking his heart and constantly hurting him? … A chain of questions twisted through my mind. But one thing is certain: as we are living in a world where it is a general belief that more money means more happiness, this real-life story reveals that true happiness is built out of a good understanding and a warm relationship within families.


A sense of enlightenment struck me – I am even more inclined to believe that family with love and understanding is the foundation of happiness.


I came to understand the old driver better suddenly: on one hand, the unwanted relationships with his children exasperate him; on the other hand, life has to go on. Being optimistic is always better than being pessimistic… 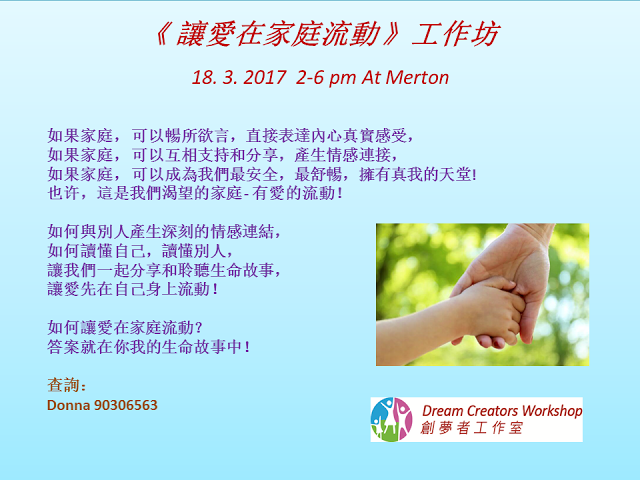 Posted by Donna Wong - Hypnotherapist and dream therapist at 4:12 PM